Dawn’s outstanding professional reputation has established her as a leading freelance harpist in the Chicagoland area. In addition to specializing in wedding performances, she maintains a thriving career entertaining for corporate, holiday, and celebratory occasions. As a versatile solo and ensemble musician she also performs regularly with various instrumentalists.

Raised in a multi-generational family of harpists, Dawn's love of performing was fostered in the rich musical environment of her childhood. She began studying harp at a young age under the instruction of her mother, Janice Bishop, who is a concert harpist in Panama and served as Chairman of the Board of the American Harp Society. Her Aunt, Linda Grieser, has recorded multiple albums with The Adagio Trio and is an active harpist in Cincinnati, Ohio. Together they have enjoyed collaborating on numerous family concerts throughout the years.

Dawn holds a Psychology degree from Wheaton College and incorporates her appreciation of holistic well-being into all aspects of her career. Beyond mere entertainment, her performance philosophy is to connect with audiences on a deeply personal level. She explains that "The calling of an artist is to awaken the listener to the inner musings of their soul. Transcending the limitations of spoken language, musical expression not only articulates, but vibrantly enhances the essence of raw emotion."

Dawn has instructed harp at Benedictine University and the Sherwood Conservatory of Music. She also received early childhood education through the Suzuki harp teacher training program. She served as co-chair for the 2007 American Harp Society's Institute and National Competition in Chicago. 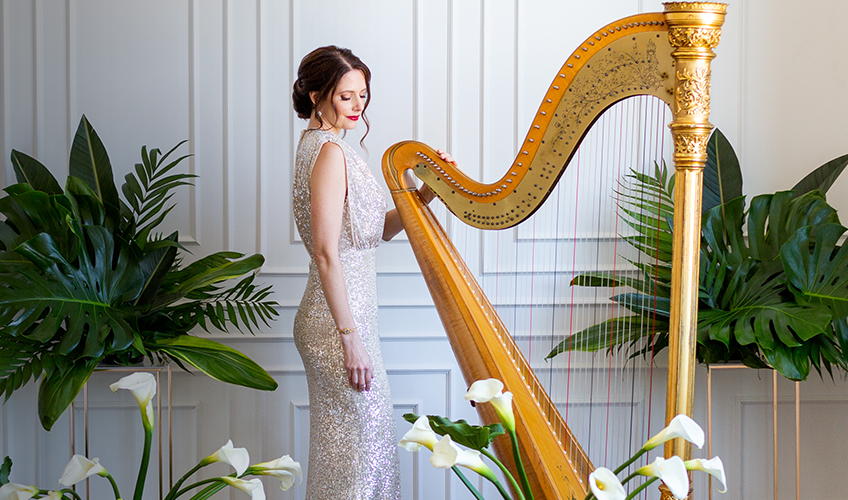 Dawn’s heirloom Style 23 concert grand harp was built over a century ago in the nineteen-tens. The original gilded detail on the crown, column, and base reflect the romantic flair of the Art Nouveau era; while the symmetry and fan-like design elements nod to the upcoming Art Deco movement. Artisans crafted this stunning period piece at the renowned Lyon & Healy in downtown Chicago.